The Red Marble, this is what I thought we’d call the first global image that would be returned by the Mars Orbiter Mission. The name is inspired by the famous 1972 image known as the Blue Marble. This was made possible by the highly elliptical orbit that the spacecraft was designed to take. Today evening, ISRO put out the first global picture of Mars. It kinda looks more like Mysore Masala Dosa, no?

Image: Regional dust storm activities captured by the Mars Colour Camera on board the Mars Orbiter Mission. Taken from an altitude of 74,500 km from the surface of Mars. Image Credit: ISRO.

Emily Lakdawalla explains the importance of this image in this blog post. If you are interested in what specific features this image covers Phil Plait aka The Bad Astronomer covers that on his blog here. Stephen Clark of SpaceflightNow reporting from the International Astronautical Congress 2014 at Toronto, Canada reports that ISRO Chairman Radhakrishnan announced that 4/5 instruments have now been activated at the Space Agency Head’s Panel. All good news!

A growing fringe of people have begun adopting them – renewable sources of electricity and segregation of waste and other small contributions towards climate change. Many people still scoff at the idea, including my parents. These will be life essentials one day. Buy now so that you get them at a cheaper rate. Demand for these May send the prices sky rocketing in the future. Zenrainman says it too 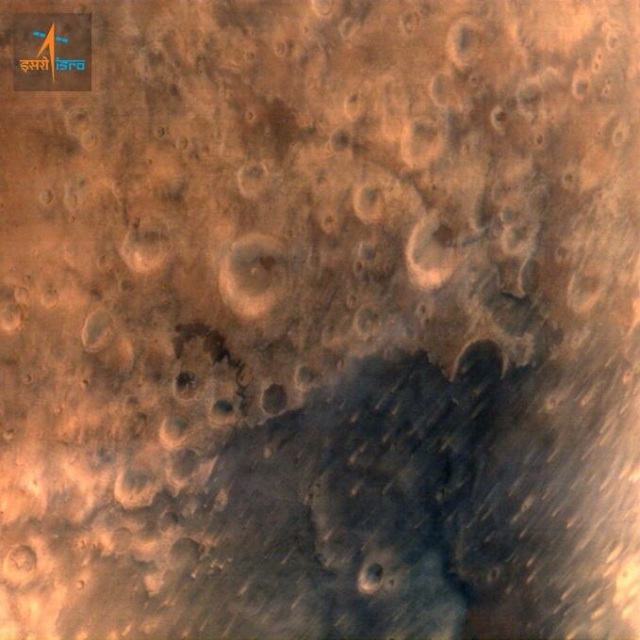 Short version: India’s Mars Orbiter Mission spacecraft successfully fired it’s Liquid Apogee Motor (LAM) today to correct its trajectory and also served as a test for the LAM which had been sleeping for about 298 days now whilst the spacecraft sped in the general direction of where Mars would be. As of 9:30 AM today, MOM is in Mars’ sphere of gravitational influence, it test fired and trajectory corrected at 2:30 PM today. Long version below.

It was 2:30 PM today when ISRO tweeted that the MOM may currently be firing its LAM to perform a test to check if it’s still working and also execute a very small trajectory correction so that the spacecraft will be set up to park into Mars orbit come the morning of September 24. About 15 minutes after that, ISRO announced to the world that they had fired the engines successfully for nearly 4 seconds.

Image: ISRO flashed this image on Twitter with the caption, “Test Firing of Liquid Engine: Guided by wisdom, Executed by youth”. link to the orignial pic

I was really sceptical about ISRO’s prospects of doing a Mars mission. They worked really hard and pulled through extra shifts to ensure that a spacecraft would be ready in time for the Mars launch window in 2013. Little news items were strewn around showing progress that ISRO made that showed that ISRO was working towards the goal of launching in 2013 but nothing quite indicated that they were ready to launch. As the launch window approached, they quickly got the spacecraft off Earth on a smaller launch vehicle than one would anticipate being used for a Mars mission anywhere else in the world.

The modified PSLV, a workhorse adaptable launch vehicle performed excellently delivering the spacecraft to its intended orbit. The spacecraft then performed orbit raising manoeuvres and slowly headed out towards the heliocentric orbit. As the spacecraft pushed off towards Mars, my skepticism slowly waned away.

For a technology demonstrator mission, the most critical part of the mission is to show that the fundamental building blocks work and can function. With today’s LAM firing, I think that ISRO proved a very crucial component of the mission design. Skepticism kept me away from posting anything here for a very long time. I have to say that I am now very hopeful that we can do this. I seek nothing more than a gentle nudge that puts the spacecraft in an elliptical orbit around Mars.

Critics of this mission have been plenty and have criticised each component of this mission design. ISRO has answered its critics thus far by action, something I think that many Indians would do well to ape.